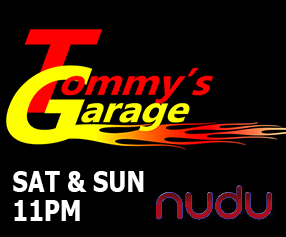 Finally! A show that speaks to the hearts and minds of Conservatives and Libertarians. The New Dumont Television Network (commonly known as 'The NuDu') proudly presents "the loudest most politically incorrect television show on the planet", Tommy's Garage!

This one hour show is locally recorded and produced fifty weeks every year out of the home and garage of Houston host, Tom Adkins.  Each week Tom and his panel of guests, a group of professional area comics, look at politics, national, international, and down right too crazy to believe news they generate.

This show is perfect for late night fringe, 11PM and later time slots. KRIV, a Houston FOX affiliate, aired Tommy's Garage at 1AM Saturday and regularly garnered a 1.6 in Nielsen ratings.

The hour show format consists of seven segments. At this first offering all available commercial time will belong to the airing station. We are confident you will find value in this syndicated program to your station and audience.

The show is available for air right now for the rest of 2018.

Here is a sizzle reel of the show:  https://www.youtube.com/watch?v=eq1WhuOMq4E

Please contact Mark Kennedy with NuDu-TV to discuss availability in your market.
m.kennedy@nudu.tv